Reaching the smallest drill holes with a laser beam 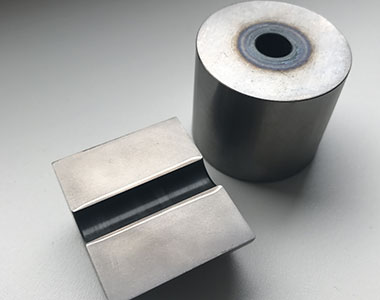 Berlin, June 24, 2019 – Hardening of small surfaces, like the inside of a drill hole or the inner surface of a small workpiece, has in the past been subject to strict technical limitations. Standard methods for hardening the surfaces and edges of steel, including flame, induction, laser beam and electron beam hardening, require auxiliary means that are accompanied by specific disadvantages. Other processes use bake hardening, but this hardens the entire workpiece and can easily cause warping.

Scansonic, an innovation leader in laser optics for welding, brazing and hardening, has developed a new process called CoHard. This technology uses a laser beam to harden components which, due to their geometry, were not previously suitable for laser hardening. At the heart of the new coaxial laser hardening process is an optic that focuses the laser beam annularly using cone-shaped lenses known as axicons. The diverging laser beam strikes the inner wall of the hole behind the focal plane at a low angle of 5° to 15°. Axial shifting of the optic makes it possible to harden the entire surface. The area in which the laser energy is absorbed is extremely narrow, which minimizes or eliminates warping of the workpiece. And there is no need to rotate the workpiece during hardening because the profile of the laser beam is rotationally symmetric.

In the past, inductors capable of delivering sufficient power did not fit into holes smaller than 15 mm. In order to use laser beam hardening, deflection mirrors had to be placed in the drill hole. However, these mirrors are exposed to extremely high temperatures and can hardly be protected from contamination.

The high efficiency of the new CoHard process was demonstrated in the first practical tests. Using a Yb:YAG laser as a beam source with a beam parameter product of 24 mm x mrad and a power of 3 kW, a drill hole with a diameter of 8 mm and a depth of 25 mm was hardened at a feed rate of 2.5 mm per second. Measurements on the workpiece verified the uniform hardening of the surface over the entire length of the drill hole. With the current configuration, the process can be easily used to harden holes with a diameter of 3 to 10 mm and a depth of 5 to 40 mm.

“Our new CoHard process opens up new possibilities for a wide range of applications – from hardening of guides and sealing surfaces used in high-pressure pumps and valves, to the hardening of bolts with extremely precise surface hardness specifications,” explains Peter Fixemer, Product Manager for Laser Hardening at Scansonic. The product is currently in a very promising prototype phase. Series-production optics will be developed by working together with customers and their individual requirements.

Scansonic supplies systems and solutions for laser welding, laser brazing, and laser hardening along with high-precision sensors for process monitoring. The company’s products are primarily used in the automotive industry, rail vehicle construction, and energy technologies. Scansonic MI is the global market leader in laser-based joining systems for body construction. The company is part of the Berlin.Industrial.Group. (B.I.G.). This medium-sized enterprise headquartered in Berlin has roughly 320 employees and generates annual sales of approx. €49.5 million (forecast 2019).
www.scansonic.de